At Dublin Montessori and kindergarten, our kids learn because they love to learn. We have a great deal of equipment, and the children can select from it the things that interest them and learn about those things. We don’t segregate children by their age: we let them learn at their own pace and the result is that they pick up things faster because they have an interest, not because the teacher has told them what to do.

Back in 1912, Frederick Burk, who was the first president of what became California State University in San Francisco, wrote the following: “The class system does injury to the rapid and quick-thinking pupils, because these must shackle their stride to keep pace with the mythical average. But the class system does a greater injury to the large number who make slower progress than the rate of the mythical average pupil . . . they are foredoomed to failure before they begin.” 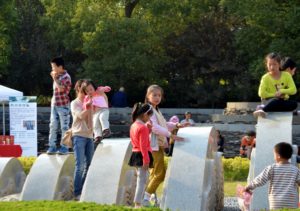 “Could any system be more stupid in its assumptions, more impossible in its conditions, and more juggernautic in its operation?”

Sir Ken Robinson in a famous TED talk entitled “Changing Education Paradigms” also said this: “Students are educated in batches, according to age, as if the most important thing they have in common is their date of manufacture.”

At our Dublin-based Montessori kindergarten we agree entirely. If you think about it, for many people it is only at school that they all learn the same thing at the same time, whether they have any interest in it or not. Once they leave school they learn about things that interest them. You might love photography, whereas I have no interest in it. You will invest time and money in learning, buying equipment, and getting out and about taking hundreds of photographs, and as a result you will become very good at it. I may be interested in trainspotting, so I spend my time around railways, whereas you would be bored stiff by it.